Over the last 18 months my heart has been well and truly stolen by Denmark. I’ve been lucky enough to visit Copenhagen three times now, and on this trip I stuck around for a while to see more of the country and it is just as wonderful everywhere I went. While on my travels I was able to get four runs in, and while I could wax lyrical for days about how wonderful Denmark and the Danes are here’s just a taste of what we got up to with our trainers on…

Unsurprisingly, at least to any regular readers or those that know me and my travelling companions, we built our flights around fitting in some parkrun tourism. First up was my second parkrun in Copenhagen (I should have run one in October last year but I got drunk and fell off a curb instead). Faelledparken was just a mile or so from our accommodation, and also the site of the following day’s Copenhagen Half start so it was an obvious choice. As with every parkrun I’ve ever visited, from the moment we saw a volunteer in hi-vis and someone in lycra we felt right at home. Chatting freely with locals about the course, how the half marathon preparations had affected the route etc it was another perfect example of how the parkrun family is a global thing and we are all a part of it. The briefing was delivered in flawless English by our Danish Run Director, and we joked about trying to do our own briefing back in Cheltenham in Danish if we ever had a tourist make the return visit. Unanimous agreement was that we had no chance!

The run itself was three laps of the park on hard packed trail, pretty enough but nothing much of note other than the site traffic and buzz of a race village being built. The support each time we passed the finish was fabulous and the welcome when we finished was lovely. As a group we had the first and last finisher, a feat we’ve been trying to achieve on our travels for a while so well done Si and Claire!

When you find the people that bring you balance play with them often!

Look at those happy faces at the sunny start!

A half of two halves! (does that make it quarters?) The race started in glorious sunshine and although the race village was a little muddy the day promised to be perfect for running. The organisation was great, which we’ve come to expect from Copenhagen races. Everything from entering online, collecting numbers (and shopping!) at the expo and bag drop off and finding our start pens was incredibly smooth. I’d put myself well back in the pens, struggling with what I now know to be plantar fasciitis I hadn’t been able to train for any kind of fast running so it was a slow social run around the closed streets of the city for me. I planned a run/walk strategy (run 1 mile, walk .1 of a mile) from the start which would mean swapping positions with Claire throughout the race, so she insisted we trade insults every time we pass. I can’t possibly share any of them here but the first 6 or 7 miles went by in blur of profanities and smiles with awesome support from the sides of the course.

Then, somewhere around 7 miles, the apocalypse started. It is difficult to explain how extreme the weather was but it was certainly the most unexpected and fierce storm I’ve ever witnessed. In the space of a few minutes we went from spots of rain to flash floods, the water falling more powerfully than my shower! Hail stones the size of marbles (or maltesers or minstrels or peanut M&Ms, we initially measured them in chocolate) were pelting the exposed flesh of runners and we ran for cover rather than towards the finish. I moved behind a tree, then behind a thicker tree and eventually huddled at the foot of a concrete pillar seeking protection from the onslaught. I’m glad I left the tree cover as moments later the most thunderous crack and bright sky heralded the arrival of fork lightening. The storm raged for a few minutes before passing as quickly as it arrived, but it had left its mark on the course. The last 6 miles were blighted by icy surfaces, flooding across the course, washed out water stations and a sudden lack of enthusiastic cheering from the crowd! What was peculiar is that as the course wove its way through the city there were obviously areas that had avoided the downpour completely as spectators in t-shirts stood on dry pavements, but all too soon we would be back in ankle deep freezing water again a few streets later. 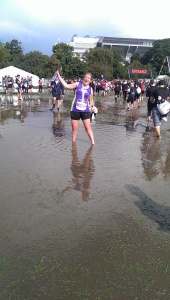 As I approached the finish line, considering breaststroke rather than a sprint finish, I heard an announcement that the race had been abandoned! The timing mats had been washed away and the storm we had run through had passed straight through the race village leaving it under several inches of water. I later learned that several people had been hit by lightening and the organisers were understandably concerned about the storm returning and the effect of a lightening strike on the newly formed lake with thousands of runners stood in it! Luckily the back up timing system still recorded an official time (2:24)but it was never about the time I just wanted it recorded that I survived and persevered! I also chased down a woman with a bundle of medals. Yes, I risked my life for race bling! We didn’t hang around in the icy water, and headed back to the hostel cold, wet, excited and satisfied. I’d definitely run another Copenhagen race, they’re great!

I look better in the dark!

The main reason for extending our trip this time was an invite from our friend Kristina, Danish National Trail Champion and ultrarunning bad ass, to the event she was hosting in her home town in the middle of Denmark. The Night Trail offered 6 and 12km courses, or for the chosen few there were 20 marathon places up for grabs. As the name suggests, it didn’t start until after dark so we found ourselves stood in a field at 9pm listening to a race briefing in Danish this time, with no idea what we’d let ourselves in for! I was signed on for 12km, which with my injury probably wasn’t the wisest move, but Kristina asked if I’d mind being tail runner for the race so I had an excuse to take it easy! 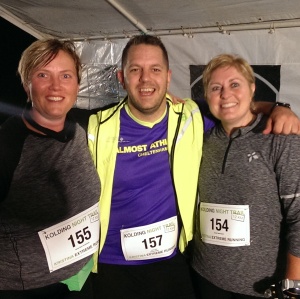 Making friends is what running should be about.

We were warned about the mud and treacherous terrain, but to be honest it was no worse than a Wednesday club run in Cranham! Running by head torch is always exciting though, every time I do it I pledge to do more and I never do. I had a great time making friends with runners at the back of the pack, learning Danish (some you’d say in polite company and some you definitely wouldn’t!) and enjoying the terrain. At times it was frustrating being stuck at the back, there were plenty of bits of the course that just screamed out to be run fast, so I think I’ll have to go back and have another go some time! We left the park about 11.30pm as the organisers settled in to a long night of supporting the marathon runners, the last of which didn’t finish until 4:30am!

Our final run of the week, another spot of parkrun tourism and a classic example of how different two parkruns can be. At home in Cheltenham we arrive at 8am with an army of 20+ volunteers and a trolley of kit plus two big bags and more. In Vejen a guy turned up at 8:50am with a carrier bag and did the whole parkrun himself! Of course we are usually catering for over 400 runners, whereas our visit boosted Vejen’s numbers to 14! There was a little confusion about the course as they had changed it the week before and weren’t sure whether to keep the new route or not, but we were assured it would be impossible to get lost so swiftly set about showing them how wrong they were! A few hundred metres of tarmac led us in to a wood, which we knew we would be running around three times. Ahead of us the path continued alongside a ploughed field, so logically the turning to the right leading in to the trees had to be the correct choice. By this point myself and Malc were happily bringing up the rear with no one else in sight but we set about the journey through the woods full of gusto and confidence. Another few hundred metres and we spotted the leaders, coming the other way, looking at us with much the same confused expressions we must have been wearing! A quick about turn and we soon learned that just beyond the turning we’d taken was a second turning, or as it should more accurately be known “the right turning”. We were taking it very easy anyway, but the addition of nearly an extra kilometre meant we were out there a little while. I still think it was a touch unnecessary to send out a search party after us, but it was nice to have some company and chat to the locals over the last kilometre.

And so ended 9 days and 4 runs in Denmark. I’m already planning my next trip, there are four more parkruns to visit and a new one starting just over the water in Malmo which is a simple day trip from Copenhagen. Lucky that, as I’ll take any excuse I can to go back to the city I love.

This entry was posted in Events, parkrun, Running. Bookmark the permalink.