“If I Could Choose The Life I Lead…

…then I would be a boatman”

That Levellers song was rolling around and around in my head this morning as I rode the 32 mile canal path from Gloucester to Sharpness and back. Indeed I was so happy at times I was belting it out loud, scaring the old folks on their narrow boats! 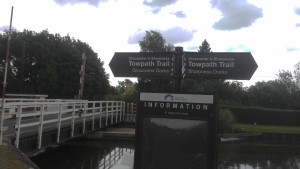 From there, to there, then back to there.

The reason for the ride was twofold, firstly to give the legs a blast on a long flat route and secondly to recce a route that may become my first ultramarathon later in the year. (there are vague mutterings about just turning up and running it sometime after the Bournemouth marathon in October)

It was beautiful. The paths were a mix of fast hard track and tough, rutted grass, but the scenery made up for it. The boats were beautiful, from the narrow barges with their ornate paintings to the big motorboats with aspirations of Monaco. Everyone we passed had a smile, there were waves from passing sailors and the bridge keepers were a friendly bunch. We saw rabbits who raced us, swans taking off, lazy dogs. We heard birdsong for hours and even the sound of cuckoos.

Where the rabbits race the bikes

We passed a boat graveyard, with the hulls of retired barges wrecked on the banks of the estuary to protect the land from erosion. I’m glad we took a few moments to stop and explore, wouldn’t want those distractions if I was running 32 miles!

Each boat skeleton is marked with a plaque describing it’s life.

Yes, I steered a concrete boat, straight in to the banks of the estuary, through the mud.

We paused briefly to admire the engineering feat that was the original Severn Bridge. Sadly destroyed by fire in 1960 the foundations were still impressive enough to warrant admiration…and of course a photo.

And in what seemed like the blink of an eye we were in the less than salubrious surroundings of Sharpness Docks. A quick stop to catch our breath, admire the estuary and we were turned around and heading home. 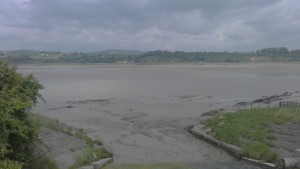 The estuary…picturesque at a push.

The way back we really pushed, revelling in a tailwind that had been our nemesis on the way down and not needing to pause to admire the view. In all we covered the 32 miles with pauses in 2:40 which given that we had no aspirations of going quick was pleasingly fast.

As for ultra aspirations…I noted the location of drinking water taps at Sharpness so I guess I must still be thinking about it now I’ve seen the route!