It’s Bretty I Feel Sorry For.

He did this last year, dressed as a smurf, probably for charity.

And yet today he is the most hated man in running, and here’s why… 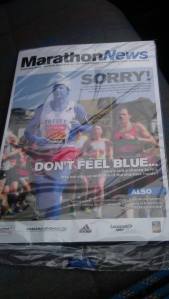 I received mine yesterday along with everyone I know who entered, with one exception. They say the odds are around 6-1 of getting a place but they must dislike Cheltenham as we are at 18-1 already and rising. Last year I didn’t open this mag until 4 months after it arrived, it doesn’t make good reading.

It’s not over for me yet though. I have a second shot at a place through my running club, who will be allocated a couple of entries. The odds will be similar, but at least I’ll find out from our chairman rather than a smurf…