Walking In The Shadow Of Giants

The 10th time I stood on Snowdon’s summit I swore I wouldn’t come back unless it was to bring my own (as yet unborn) children to the top of Wales sometime in the far future.

On Saturday, as I sat at the top for the 20th time, I mused over my reasons for returning so often to the hustle and bustle of the busiest piece of mountain rock in the British Isles.

It’s always revolved around opportunity and other people. It’s easier to convince someone to chip in for the petrol if you’re going to Snowdon. Mountain virgins are more readily lured by the charms of Snowdon than some unpronounceable Welsh rock elsewhere. Then there’s been the trips to assist the Scouts or bagging an invite on someone else’s ascent. Every time I say “never again” and every year I’m back twice at least.

This weekend though I had a very valid reason for tackling the 1085 metre behemoth, once again other people had provided the opportunity but those other people were a little bit special… 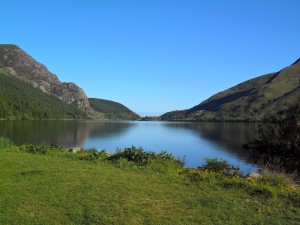 The view from our tent…I could wake up to this every morning!

And so it was that on Saturday morning I joined 50 other people setting off from the Cwellyn Arms for an ascent of Eryri (one of two Welsh names for the mountain) via the South Ridge.

This has long been my favourite route up the mountain. Much quieter than the routes on the northern side with a mix of old slate mines, stunning vistas, lung busting climbs and even a few short scrambling sections. What made this trip special though was the company. I feel in with Graham Thompson, gear reviewer for Trail Magazine for over two decades. It was fascinating to hear his story of how he got involved with the mag, the way an issue is pulled together, the changes he’s seen in kit and getting his opinion of what works. What was even better than his banter though was his excitement! After several decades of walking the mountains to see him still excited about a stunning view was infectious, it made me realise how often I focus on getting to a mountain summit without thinking about the journey. There’s a deep philosophical message in there, but I’ll let you dig it out for yourself. 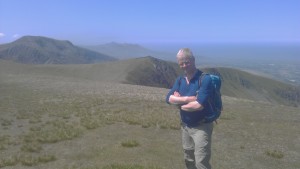 On the summit I had the honour of lunching next to mountaineering legend Alan Hinkes. The only Brit to summit all 14 of the planet’s mountains over 8000 metres. A typical no nonsense yorkshireman he gave a fascinating insight in to big mountain guiding, the advantages of a block of cheese over tube of primula and why we should never complain about the crowds on Snowdon. I learnt so much from him in 10 minutes, if I ever win the lottery I hope he’ll be my guide someday.

A mountaineering legend…and an aspiring one.

Talking of winning, that night there was a quiz organised by the Trail guys in the pub. I somehow ended up in a team with a guy who fell out the door drunk after round 2 (he’d had too many of “those 1084 beers”. The beer was actually called 1085, the height of Snowdon in metres. The fact he couldn’t even get that right suggested he was no great loss!), but myself and my remaining team mate perservered and we came….fifth. Luckily the teams that came third and fourth had already left and so we still got called up to choose a prize from the Trail gear cupboard, so I was able to give a very nice OMM jacket to my mountain buddy Claire, result! I did win on the raffle, a lovely Snowdon paperweight, which has pride of place amongst my race and challenge memorabilia.

Sunday saw another great group walk, although with a few less of us. Tackling Y Garn and part of the Nantle Ridge I walked a lot with Dan, feature writer for the magazine, and we discussed how they get approval for trips and what ideas work. Was fascinating to hear what goes in to creating a few pages of copy, and he very politely received my ideas although I’m sure they’ve all been done before somewhere in the magazines history!

Part of the Nantle Ridge

After another stunning day in the hills, this time with some proper scrambling thrown in, it was time for home. This weekend was a timely reminder of how amazing our mountains can be and just how accessible they are. I will be making the effort to see them more often, but if you ever hear me talk about going up Snowdon again, shoot me!

The gang on top of Y Garn