I couldn’t go to Paris for the marathon (review to follow!) without taking part in the newly established Paris parkrun in the city park of Bois de Boulogne. 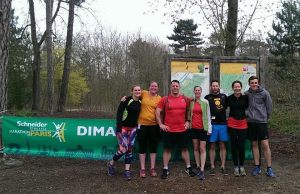 The locals haven’t quite got to grips with parkrun yet and so the field is normally a modest 20-25 runners, but on marathon weekend the crowd swelled with 176 turning out! It seems that the volunteers and runners are usually Brits abroad, in fact one marshal was heard to comment “we’ve even got two French runners this week!”, but when the Parisians do discover this gem of an event it should take off quickly. 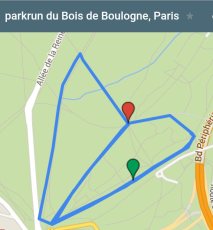 The course is flat and fast, on tarmac and hard-packed trail and (with a little imagination) in the shape of a heart, which was much commented on by the travelling tourists who love parkrun! The volunteers were fantastic and managed the swell in numbers with ease, with bilingual briefing and one of the friendliest marshals I’ve ever encountered! (although they will want a second scanner when they have that number of finishers regularly) 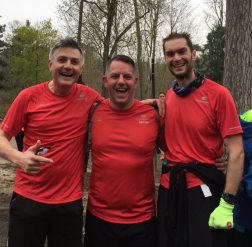 With the guys from Southwark parkrun

With the marathon looming most runners took it easy and all were wearing their club colours or parkrun milestone t-shirts. It was great fun chatting on the way round, enthusiastically thanking the marshals and dodging the bemused dog walkers and park users. One of my personal highlights was being shouted out by a fellow runner who recognised me and gave me a very excited greeting. It took a moment before I realised it was Laurent, Run Director from Southwark parkrun which I ran at Christmas! It was great to see him again and have a catch up, a true example of the wider parkrun family and how it brings runners together.

Support at the finish was fantastic, with everyone staying to cheer in the last runner (our own Claire from Cheltenham) before the majority strolled the 800 metres to the outdoor cafe for coffee and croissants and more chat. Thoughts quickly turned to the 26.2 miles of the following day, but it had been a perfect start to a weekend of running in “the most beautiful city in the world”.

There are rumours of a second parkrun on the horizon for Paris at the beautiful Bois de Vincennes on the other side of the city. If this event is anything to go by that might just be worth travelling for on its own. 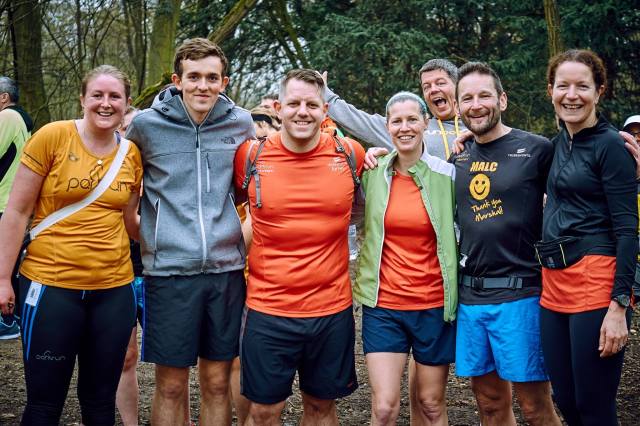