This Sunday saw the 32nd running of the London Marathon. Unfortunately I wasn’t able to get to the capital this year to cheer the runners especially those supporting WellChild, one of my favourite charities, and runners from my club Almost Athletes. But I did watch the marathon on television for the the first time since I ran it in 2011, and boy did the memories come flooding back! It was fantastic to see the course again and remember how I felt at each stage. Watching the masses at the start ooze over the line rather than pour, I’m wondering how I can become a celebrity before I run it again and get a quieter first few miles on the green start! The crowds were a credit to London, 6 or 7 deep at some points and a constant wall of noise for 26 miles. I had no doubt they would come out in their droves, unperturbed by the terrible events in Boston a week earlier, but I wasn’t expecting quite that response. They should be proud of their own efforts as well as those they came out to cheer. London is the only race where I’ll watch the professionals running for 2 hours quite happily, and thanks to wheelchair crashes and last mile challenges it was entertaining all the way. Even Mo Farah’s questionable 13 mile appearance couldn’t take the shine off the quality of the racing.

As for the less elite runners, amazing amounts of them were finishing not far behind the winners and so many runners came through in under 4 hours that has to be the target for my marathon PB one day. The usual array or fancy dress was on show, idiots running with fridges or dressed as Gandalf, inspirational every one. Some of the stories we heard from poor runners stopped in their tracks by Denise Lewis on Tower Bridge were heartwrenching tales of suffering and loss, that they inspire and motivate such running dedication and fundraising success is a silver lining, albeit very thin in some cases. As for the poor chap stopped by Colin Jackson inside the last mile who was trying to politely explain that he was aiming for a PB whilst Colin interrogated him about how fast he hoped to run, I just hope he made it to The Mall in time. Rest assured that should I ever run London again I won’t be stopping for a chat, not even if Jessica Ennis herself waved her microphone at me!*

I say “should I ever run London again”, what I mean is when because watching on Sunday, even more so than being there supporting in previous years, reignited my desire to go back and have a proper go at that course. I will be entering the ballot, and the running club ballot, every year until I get a place and go back. London, we have unfinished business, and I’m coming for you… 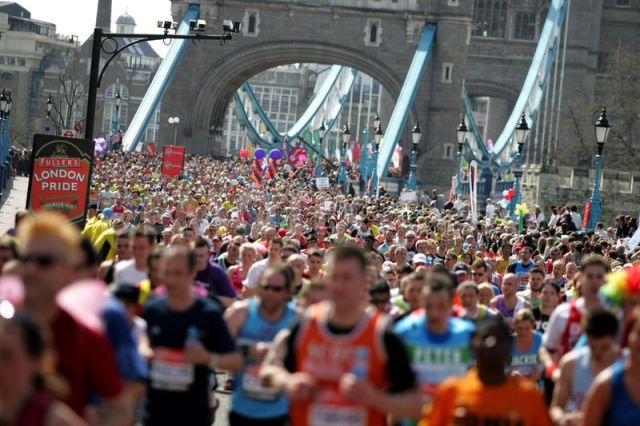 The soundtrack to your running is as personal as your choice of trainers, favourite route or pre-race toilet routine. Everyone is different and rightly so. In fact, I’m different every time I go out, so I wouldn’t ever look to promote any particular album or even genre through this blog, at least not for running to anyway. However, what I will do is encourage your suggestions to me. I’ve been stuck in a musical loop for a while so I need your help in breaking free and powering my runs with some new sounds. I will listen to pretty much anything, and I’ll put anything on the ipod and take it for a run if you tell me you enjoy it. I’m not looking for people to second guess what I might like, but leave me a comment and tell me what YOU listen to and I’ll give it a whirl. Thanks!

*I reserve the right to change my mind on race day and stop for a chat with Ennis if the opportunity arises!