I’ve spoken before about how hard it can be to find decent routes for long runs at the business end of marathon training. In recent weeks I’ve taken to the Forest of Dean for laps of the fire roads and done 18 miles around the track at the local athletics stadium.

This weekend was my last long run, the final twenty miler before the start of taper time, and again I wanted to try something a little different. This time I opted for using the 2km long Honeybourne Line cycle track that runs close to home and going back and forth to rack up the miles. For many that sounds like a horribly monotonous way of doing things (indeed, many of my friends and club mates questioned my sanity!) but there was method to my madness.

There’s worse places to do your miles.

By staying on one piece of tarmac for over three hours, I was able to invite friends to join me at any time for any distance. It didn’t matter when they came down or which way they started running, within ten minutes of them starting our paths would cross. I also had somewhere I could leave water and my jacket etc, so I wasn’t carrying anything other than my gels, just like on race day. The other beauty of running along the cycle path is that, with the exception of inquisitive dogs or buggy wielding mothers, there are very few obstacles to negotiate. Certainly no roads to cross or traffic lights to stop you, no  roadworks, uneven pavements or lamposts to avoid. In fact it was perfect for even paced running with only the turn at either end to slow you down for a few seconds.

So it was that I set off at 10am on Saturday morning, in the company of Hazel and Dom (Almost Athlete club mates who had just done parkrun nearby) and with my mum keeping an eye on things at the start line. Over the first few miles quite a few friends popped by for some mileage, some returning from parkrun, others building it in to their own running plans for the morning. At one point I think there were 7 or 8 of us running together, which was a great start and made the first 6 miles fly by.

I was the Pied Piper of Cheltenham for a short while!

As the first batch of company left I knocked off a few miles with Jackie, who is training for Race to the Stones, a 100km trail ultra. Her weekend of running made my 20 miles look like a walk in the park, great motivation! Before long we were joined again, by club mates Glen and Anne-Marie (one having just done Krakow Marathon and the other training for a 5 day ultra, The Forces March…what an inspirational bunch to roll with!) and Thunder Run team mate Foz…if you’d told us 2o years ago when we left school we’d be distance running together in our late thirties I think we’d both have laughed in your face!

With such great company, and some wonderfully loud cheering along the way from Glen’s family, the miles fell easily and I was almost sad to see the watch tick over to 20 miles and the end of my long running ahead of Edinburgh. The few hours after I was a bit tender, but lots of stretching and rolling and I woke up Sunday morning considering going out for a few miles!

So that’s it, long run done, and now normally it would be taper time…except I’ve signed on to do the Yorkshire 3 Peaks Challenge next weekend, so rest will have to wait another week! 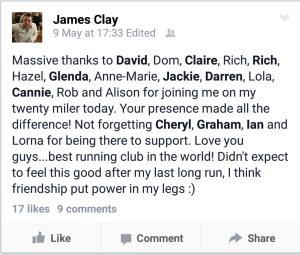