“Training is having a goal, being intentional in your actions, your effort has purpose and your energy has focus” – James Clay, to every athlete he has ever and will ever coach.

There, I said it. All this “new year, new me” bullshit, I can’t stand it. I didn’t want to say anything before, I wanted you to have an idea of the changes you were going to make and the first day of the year does serve a purpose in prompting people to have a look at their lives and highlight the things they want to see differently in twelve months time. However, if you waited for a specific day in the calendar before making that change for no other reason than the date, well that tells me a lot about how much those changes mean to you. If they were important, if they burned in your soul and you were wholly committed to them, you’d have given up chocolate on December 28th or gone for a run on December 31st. Don’t confuse a resolution with anything other than a vague wish to do something for a while and be different at the end of it.

It’s quite possible your resolutions tie in to your dreams. Dreams are wonderful, magical things…you can do anything in dreams, be anyone, achieve the impossible. It’s no coincidence that “dreams” means both those vague hopes you have for the future and the often crazy sub-conscious musings of the brain when you’re asleep. Both are intangible, uncontrollable and most times nonsense.

Here’s some examples of dreams:

Dreams. Vague thoughts and ideas with no basis in reality.

So that leaves us with goals. I LOVE goals. Goals don’t need a calendar to determine a start date. Goals aren’t vague or imaginary. Goals can start right now, are real and will get you to were you want to be.

(There are other versions of this acronym, but my blog my rules!)

Let’s take another look at some of those dreams turned in to goals:

With one simple exercise on paper we’ve defined what we want to achieve to create the future we desire. With clearly defined goals we can start to break down the steps needed to get us there (more on that in a blog post coming your way soon…)

So, I ask you dear reader, now the dust has settled on a few weeks of bank holidays and endless prosecco and we are back to something approaching normality, now you’ve made some vague resolutions and tried them on for size, what are your goals? 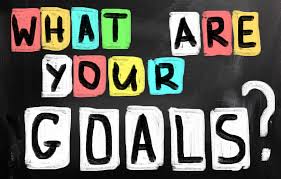